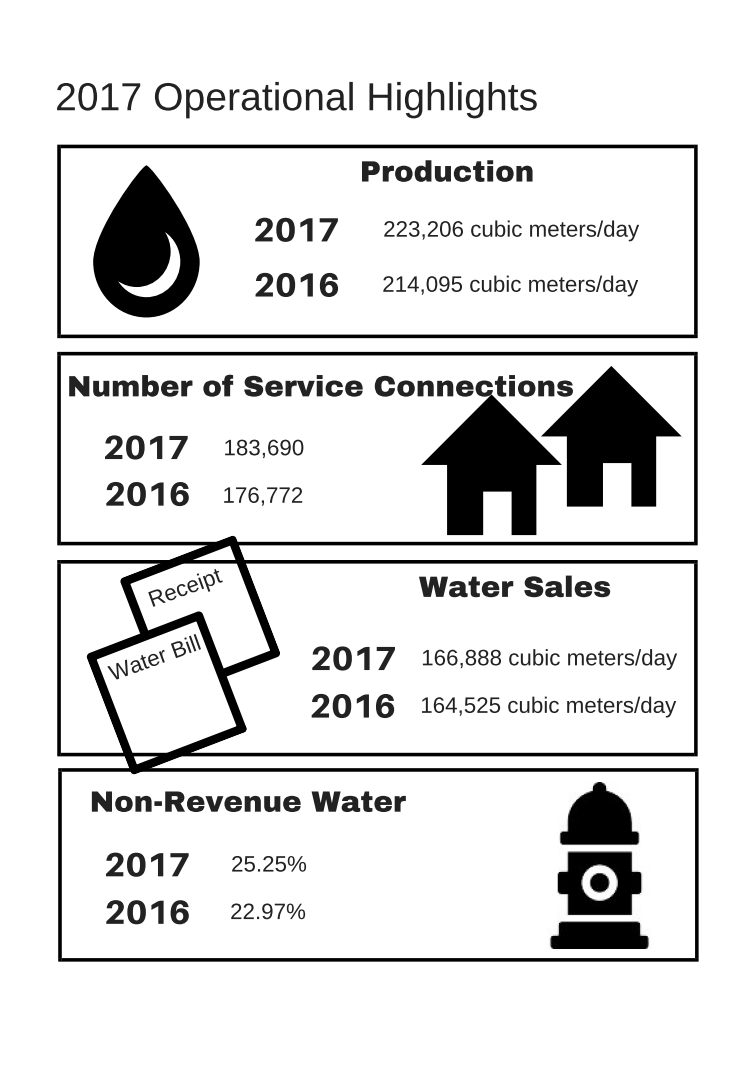 As of December 2017, Metropolitan Cebu Water District (MCWD) was producing over 220,000 cubic meters per day and serving over 183,000 service connections in its service area composed of the cities of Cebu, Mandaue, Talisay and Lapu-Lapu and the
municipalities of Consolacion, Liloan, Compostela and Cordova.

At the onset of the 1900s, densely populated Cebu City’s only water sources were shallow wells, which were easily contaminated by surface water, and small springs; as deep wells were usually unproductive. The island has no major rivers, so rains quickly drain into the sea. Cebu’s topography and climate worsened its sanitary problems. Fire and epidemics frequently victimized the city; in 1909, Cebu suffered the worst cholera epidemic in its history as hundreds of its 55,000 people died. In 1910, the then Cebu Municipal Council created the Osmeña Waterworks Systems (OWS), which had its first major water source–the Buhisan Dam–officially inaugurated in 1912 along with a storage reservoir and some 95 new fire hydrants.

By the 1970s, OWS suffered deficits and was subsidized annually with about P1 million by the Cebu City Government. At that time, its 12 water sources produced some 15,000cubic meters per day that served some 10,600 service connection.

Then Presidential Decree 198 or the Local Water Utilities Act of 1973 promised loan, training and other assistance to autonomous water districts, the Cebu City Government under the mayorship of Engr. Eulogio Borres approved Resolution No. 873 on May 9, 1974 to create the Metropolitan Cebu Water District (MCWD), and Resolution No. 1378 on July 18, 1974 to specify that component cities and municipalities must share in the subsidy or counterpart funds when needed. Now honored as the Father of MCWD, Mayor Borres then turned over P25.4 million worth of OWS assets and facilities to MCWD – the Buhisan Dam, the Tisa Filter Plant, the Jagobiao Spring facility, ten wells, the Betania reservoir and a bodega in Lahug.

On February 1, 1975, MCWD fully operated with a P200,000 loan from the Cebu City Government. Despite its small income, the district was able to pay its loan.

To improve its services to the cities of Cebu, Talisay, Mandaue and Lapu-Lapu, and the municipalities of Consolacion, Liloan, Compostela, and Cordova, MCWD embarked on project after project: the P58 million – Interim Improvements Program and the P112 million – Advanced Improvements Program in 1976, the Program I, Early and Main Works Development in 1983, the Operations and Maintenance Assistance Program in 1984, the P468 million – Northern Well fields Project in 1990, the Mactan Beach Resorts Water Supply and the P46 million 16 well – development projects in 1991, the
P770 million – Mananga Phase I Development Project in 1994, and the Cordova Water Supply Project in 1995.

In 1992, the Supreme Court declared all water districts as government-owned and – controlled corporations. MCWD stopped operating as a quasi-public corporation.

By 1999, MCWD, which was then caring for 98 water sources to produce an average of 131,900 cubic meters per day to serve more than 75,100 service connections, and with fixed assets worth P1.9 billion, crafted its vision, mission and core values.

In 1999, too, MCWD’s water laboratory was recognized as one of the country’s first 11 environmental laboratories by the Department of Environment and Natural Resources, the Environmental Management Bureau, and the United Nations Development Programme. Also, MCWD and former Congressman Raul Del Mar opened to the public the D’ Family Park, the first developing nature park-wildlife sanctuary-botanical research
garden in the province.

In 2000, during MCWD’s silver anniversary, the Pusok Water Tower in Lapu-Lapu City, which was idle for nine years, was launched into a full-blown water supply management project, signaling MCWD’s intent to closely address the water supply situation in Mactan, where the region’s economic zones are nestled.

That same year, the Civil Service Commission and the Local Water Utilities Administration accredited MCWD as a training institution. LWUA’s accreditation was a renewal of MCWD’s previous recognition as a training center during which time it garnered the Most Outstanding Training Center award in 1990.

As MCWD moved to its new eight-storey building in 2002, it continued to explore and tap bulk water supply deals and expand its service area, as it intensified its watershed management efforts, appropriating millions of pesos in reforestation campaigns,
watershed rehabilitation and security, and water resources care.

In 2003, the water district commenced its Massive Rehabilitation Program to maximize the effectiveness of its pipelines, as it continued its Communal Water Service expansion in depressed areas.

After MCWD was certified to be ISO 9001:1994-compliant, also in 2003, it began the legwork for a certification in Integrated Management System (pursuant to Environmental Management and Occupational Health and Safety standards), including an upgrading of its ISO 9001 certification under the 2000 Version. Then in 2004, MCWD drafted its Strategic Plan, clearly defining each working unit’s objectives in the light of the
organization’s Vision Mission. 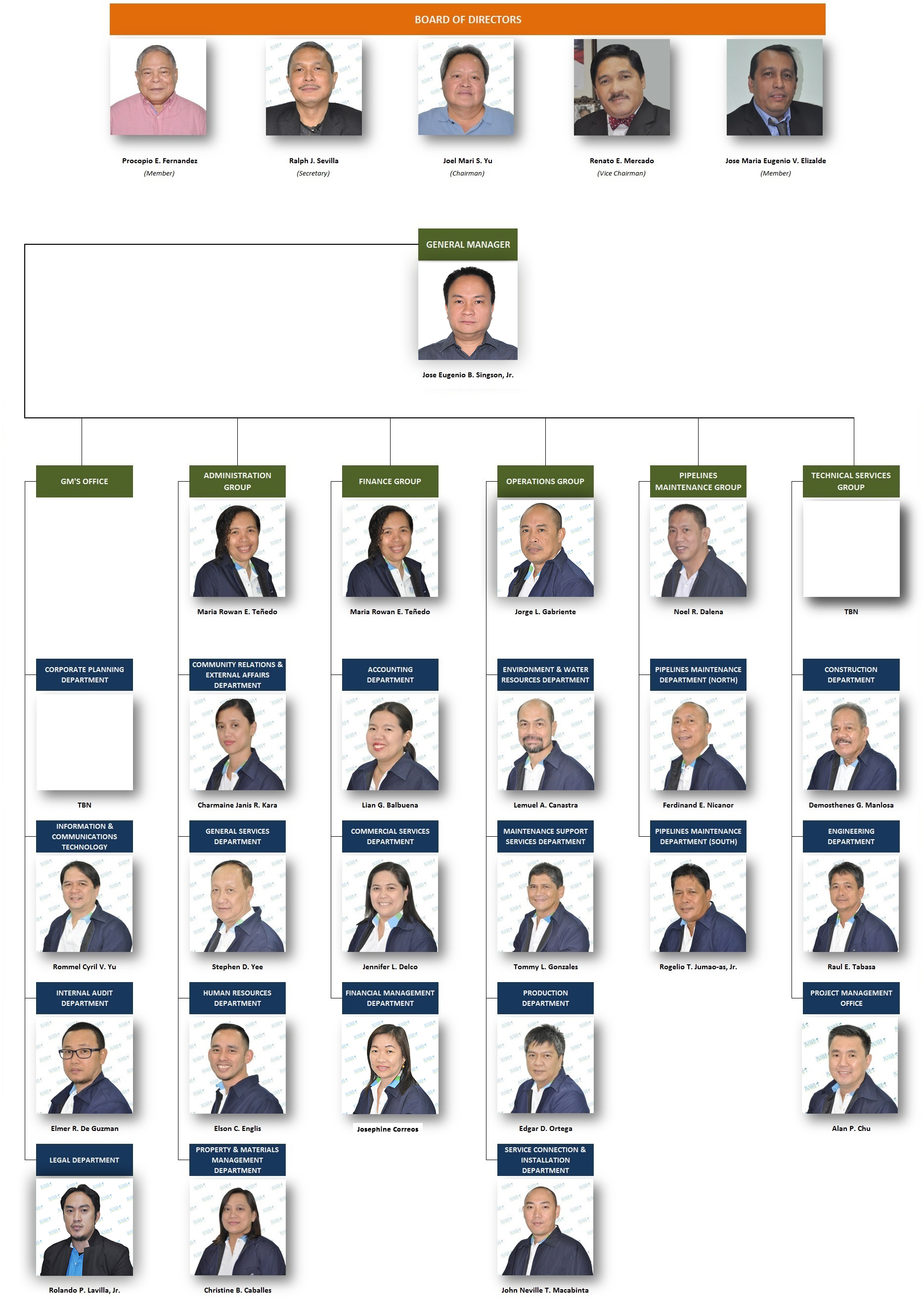 To attain our vision through the fulfillment of our mission we must establish a culture deeply characterized by our core values. Everything that we do in the office and in the field on a day-to-day basis must be imbued by the force of these our core values.

Anchored in the belief that our major reward in work consists in making people happy because we serve them well. Let us be accessible to all our customers and serve them with sincere and honest attention. Our spirit of service must go beyond responding to the customers complaints by providing them with prompt service and accurate information.

Built on the reality that human dignity and happiness is essentially linked to the practice of moral values in the workplace and elsewhere. Genuine selflessness will be our prime motive for doing our work. This means that we principally desire to be of valuable service to people, and not to do our work simply because of what we can get in return. Avoid all use of influence and connections to get undue favors for oneself or for others, and refuse to influence one another negatively. Let us encourage a lifestyle that is truly respectful of a person’s dignity. Reject all use of MCWD resources and time for our own personal convenience and financial benefit.

Loyalty to Our Institution

Rooted in the intrinsic values of our corporation worthy of our love and pride. Let us align our personal goals with the corporate goals of MCWD. It would be a disservice for any employee of MCWD to use undue influence which is in conflict with the corporate goals. Deep concern about the image of MCWD must characterize our behavior at all times. We must strive to contribute to the good image of MCWD by doing our work selflessly with competence and integrity. Loyalty to our institution leads us to be mutually supportive of all the employees and departments of MCWD with no exception whatsoever.

Based on a belief that our God-given talents must be made to grow and be constantly improved so that we may be of better service to people. It is our personal responsibility to build our own competence by working hard and demanding a lot from ourselves, seeking to upgrade our skills and learn from our mistakes. Let us create and maintain a culture where respect for work standard is paramount and where we help one another in striving for excellence.

Linked to our ideal that it is through excellence in our performance that we best serve people. We must find pride and meaning in our own work, principally because we have work productively, constantly conscious of the standards we have set for ourselves. Let us instill a sense of urgency in all that we do. We will fight against all forms of procrastination. This will require that we take timely and adequate initiative in all our efforts. Conscious of the need for goal setting at all levels of the organization, we need to be forward-looking and review our goals often.

Founded in the knowledge that our organization will be firm and strong, anchored in the spirit of solidarity by which we all strive to contribute to the good of all. The strength of an organization is found principally in the united power of people. We will foster an atmosphere of genuine trust and confidence in one another based on building competence and instilling integrity within the organization. Open and honest communication shall likewise be encouraged A sense of fairness and justice would guide all our actions and thoughts. This requires a firm respect for the rights of everyone without exception. We must avoid all forms of envy and greed.